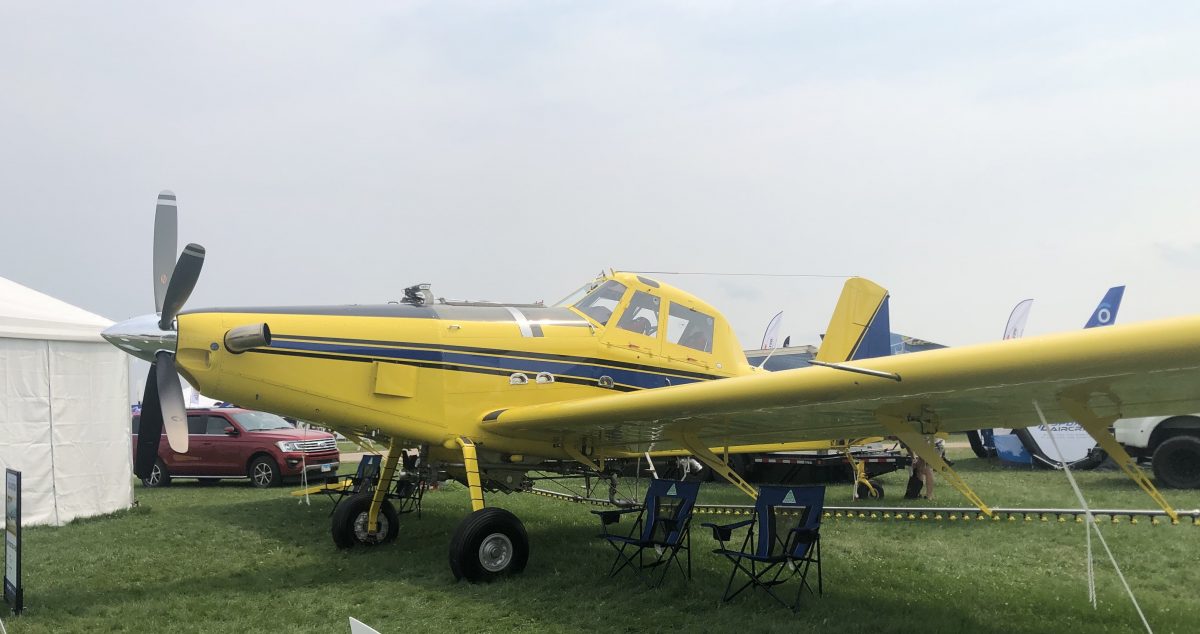 Celebrating a Century of Service: The 100th Anniversary of Aerial Application

One hundred years ago, on August 3, 1921, Army test pilot Lt. John A. Macready took off from McCook Field in Ohio in a modified Curtiss JN-6 “Super Jenny” to demonstrate an aerial crop dusting over a nearby Catalpa tree grove. Utilizing a simple hand-cranked application device, the airplane effectively spread lead arsenate dust over the grove to kill sphinx moth larvae that fed on the wood used for fence posts, telephone poles, railroad ties. At the time, no one could have envisioned how this experimental flight would give way to today’s modern era of high-tech aerial application.

Ag Aviation: Then and Now

Modern ag aircraft are built to be rugged and reliable. They can handle 30 to 100 takeoffs and landings every day from rough landing strips while offering protection and good visibility for the pilot. The aircraft are equipped with high-tech spray equipment, GPS systems, avionics, and onboard data analytics capabilities to deliver precise and accurate application of plant nutrition and plant protection products. Aerial application also plays a vital role in fighting the wildfires currently ravaging hundreds of thousands of acres in several western states.

Working as an ag pilot is simultaneously exciting, challenging, and rewarding. The National Agricultural Aviation Association states that there are approximately 3,400 total ag pilots in the U.S., with around 1,560 aerial application businesses located in 45 states——all but Connecticut, Hawaii, Rhode Island, Vermont, and West Virginia. However, aerial applications are conducted in all 50 states. The National Agricultural Aviation Association has a wealth of information and resources for those interested in pursuing a career in the world of ag aviation.

A Special Way to Celebrate a Century of Agricultural Aviation

In commemoration of the 100th anniversary of the first documented use of aircraft for aerial application, the agricultural aviation industry gathered at Virginia’s Leesburg Executive Airport on August 3, 2021, to reflect on a century of service and innovation.

A highlight of the event was the handoff of a life-sized, fully functional replica of “Dusty Crophopper,” the hero of Disney’s animated films Planes and Planes: Fire and Rescue. Texas agricultural pilot Rusty Lindeman worked in cooperation with Disneytoon Studios to transform Dusty from an animated character to the “real thing” — a converted piston Air Tractor. Thanks to a donation orchestrated by the National Agricultural Aviation Association, the Dusty Crophopper replica plane will be a part of the permanent collection at the Smithsonian’s National Air and Space Museum and will debut during the museum’s Innovations in Flight Family Day display on August 21.

“The last century has brought almost unimaginable innovation and technological advancement in agricultural production as a whole,” said Andrew Moore, CEO of the National Agricultural Aviation Association in a release. “And no segment of agriculture illustrates that warp-speed progress more than how far we’ve come in aerial application.”

“Along with its essential place in agriculture, aerial application has become an important tool in wildfire fighting, as well as in public health for mosquito control,” added Moore. “It’s a safe bet that what began as an experiment in 1921 will continue to offer solutions to other challenges in the coming decades, like climate change and the increasing demand for food.”

Hartzell Propeller is proud to manufacture high-performance propellers optimized for the agricultural aviation market, providing today’s ag aircraft with improved performance and reliability. No matter your aircraft’s mission – whether it’s crop dusting, aerial topdressing, or hydroseeding – you can be confident that your aircraft will operate at peak performance. Plus, our global network of recommended service facilities ensures ag aircraft operators around the world can receive superior local support and service for their prop.

Contact our team today for more information about aviation propellers for agricultural aircraft.