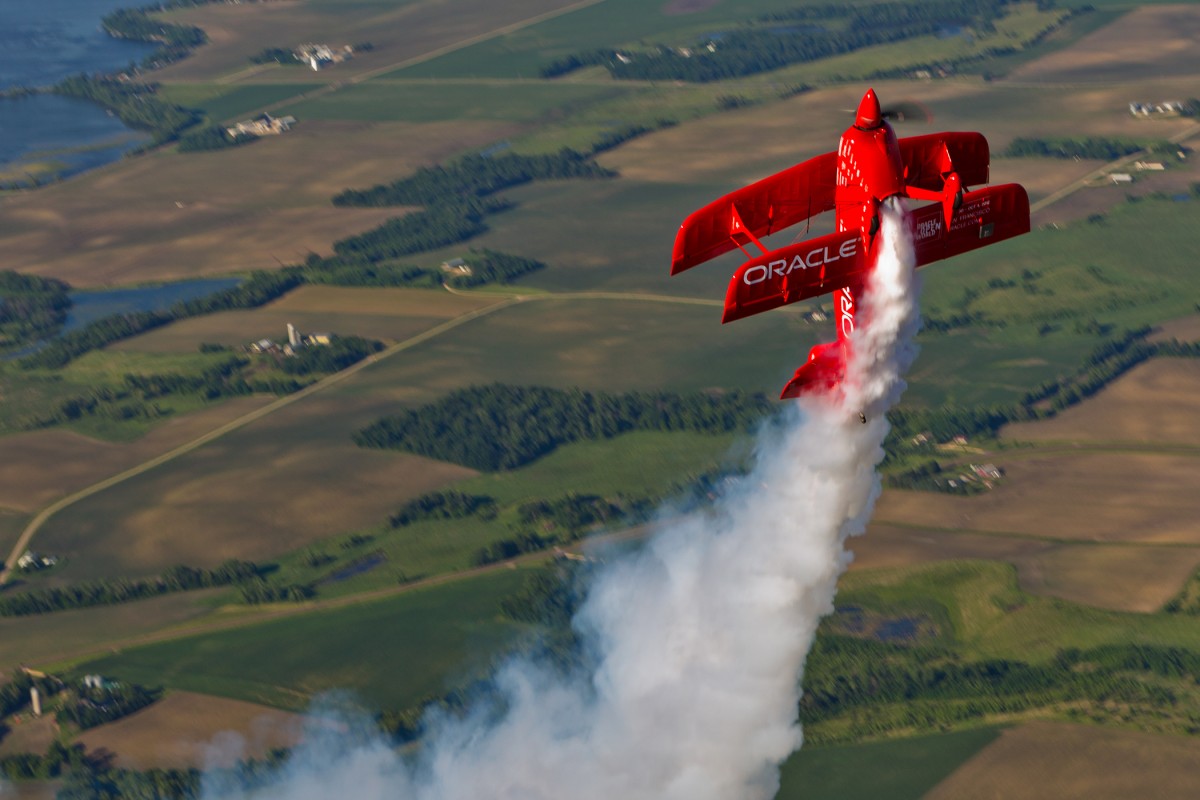 Aerobatic pilots like Sean D. Tucker and Michael Goulian are among some of the world’s top aerobatic performers. They showcase their technical skill and stamina with amazing feats every year in the skies.

There are five general categories of maneuvers: horizontal and vertical lines, rolls, hammerheads, loops, and spins.  So what are some of the sport’s most popular and impressive maneuvers?

Here are our picks:

2) The Hammerhead (also known as the Stall Turn)

The torque/gyroscopic effect of this maneuver is what makes it so thrilling to watch.  To start, the pilot completes a quarter loop to vertical. As airspeed decreases, the pilot applies the rudder so the aircraft rotates around the yaw axis. This causes the nose to point to the ground, and there’s a pause made, drawing the vertical flight line down and making a quarter loop to level flight. Despite being called a “Stall Turn,” the aircraft doesn’t really stall. What happens here is that gyroscopic forces caused by the propeller during the rate of yaw produce a rolling movement. Keeping the aircraft under control during this maneuver is challenging, and requires expert skill.

This was the figure that test pilot and aviation pioneer Jim Doolittle proved as technically possible back in the early 1920’s (LINK TO POST), despite many aeronautical engineers claiming it was impossible. The pilot enters a vertical circle from straight, level flight, its canopy pointing out of the loop, and drops. What makes this so challenging is that it creates powerful negative G forces.

Spins are generally grouped into a family of maneuvers, which may be upright or inverted. To complete a spin, or a series of spins, the aircraft must have a critical angle of attack (which stalls the aircraft) and yaw, which is a twisting or oscillation of the aircraft around a vertical axis. Creating a series of spins, one into another, requires intense practice and skill.

There are many different roll variations to choose from, but our pick is the rolling leaf. With the throttle off, the wings level stall, and the plane begins to slip into one direction. The pilot then counters the slip with the rudder before a true spin occurs, so it slips back the other direction, like a leaf. Countering with the rudder again slides it back, and the pilot can then continue this slip and slide motion or simply dive to exit into the next maneuver.