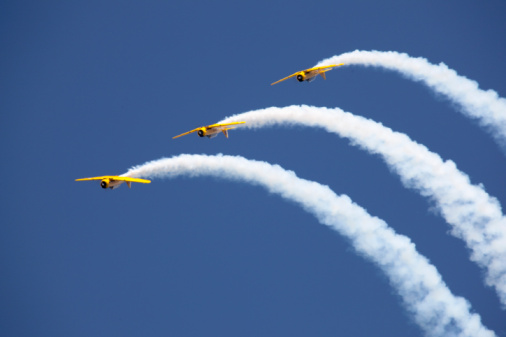 When we look at modern aircraft, it’s remarkable to think about how far aviation has come in the past 100 years. From improvements in safety to innovation in speed and style, here are the top seven aviation breakthroughs in the last 100 years.

Without cabin pressurization, aircraft would not be able to fly safely above 15,000 feet without causing significant physiological damage to passengers and crew. In 1937, the U.S. Army Air Corps built the Lockheed Electra, the first aircraft with a pressurized cabin. Today, all airliners are pressurized, keeping the passengers and crew safe at high altitudes.

Avionics refers to the electronic systems used on aircraft for communication, navigation, collision-avoidance, and many other functions. Avionics were developed during World War II. Innovations like autopilot systems were created to help bomber planes fly steadily from high altitudes and hit precision targets. It’s hard to imagine what modern aviation would be like without the assistance of avionics.

Stormy weather can be a serious hazard to aircraft. During the 1980s, NASA researchers flew an F-106 jet into lightning storms to determine the electrical and physical effects of lightning strikes. The experiment helped improve test standards and provided information for the designers of future aircraft. On average, every airliner is struck by lightning at least once a year, but thanks to safety improvements like carbon fiber composites and surge protectors for avionics systems, results of such strikes haven’t been fatal in decades.

Spin, which is caused by a reduction in lift during flight, can send an aircraft spiraling to the ground. In the early days of aviation, spins were often unintentional and fatal. During the 1970s, NASA researched this condition by deliberately spinning different aircraft in a special spin tunnel. Because of this research, aircraft are now designed to recover from steep spins more reliably, and pilots can be educated in spin training.

Wind shear is a microburst or downdraft of air that often occurs during thunderstorms. These bursts are so powerful that they can ground and disable aircraft, especially near landing or takeoff. NASA researchers developed technology to help pilots detect wind shear before it occurs. Now, aircraft mishaps related to wind shear rarely happen.

When ice builds up on an aircraft’s surfaces, wings, and propeller blades, it changes the aircraft’s aerodynamics and can cause a stall or loss of control. In the 1920s, pneumatic de-icing boots were developed for turbo propeller aircraft. Air frame de-icing boots are made of rubber, and inflate mid-flight to crack and remove ice buildup.  Propeller de-ice boots integrate a metal heating element powered by electricity to shed ice during flight.  Larger aircraft use anti-icing systems, which blow hot air from the engine and prevent ice from forming.