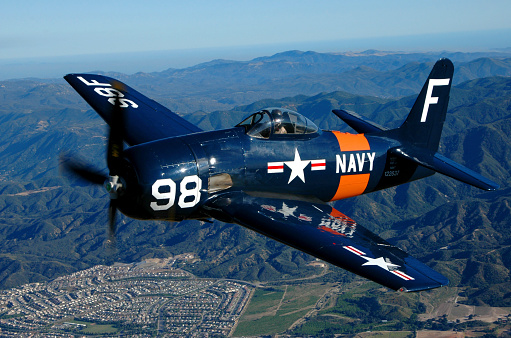 Many of these planes are obtained by aviation museums and receive major restoration work. This week, the USS Hornet Sea, Air & Space Museum unveiled their most recent restoration of an FM-2 Wildcat, which was recovered by A&T in 1994. Now, after over five years of restoration work, the FM-2 is ready to be displayed in the museum in Alameda, California.

Built by the Eastern Aircraft Division of General Motors, the FM-2 Wildcat was intended to be an improved version of the Grumman F4F-4. Dubbed the “Wilder Wildcat,” the FM-2 was optimized for small-carrier operations, with an enhanced power plant, increased fuel capacity and a taller fin than the F4F. The FM-2 also had fewer wing guns than the F4F – four instead of six – allowing the aircraft to carry more ammunition to the fight.

But how did so many aircraft end up at the bottom of Lake Michigan? As Air Zoo CEO Troy Thrash explained in a 2016 interview, “During World War II, there were two passenger cruise ships that had their decks leveled to basically create a simulated aircraft carrier. There was a need for American pilots to be trained to take off and land on aircraft carriers before they could be cleared to go fly in the Pacific or in Europe.”

Now on display at the USS Hornet’s floating museum, this FM-2 looks better than ever thanks to the restoration work of volunteers with the Hornet Air Group.

According to Rick Thom, Director of Aircraft and Ship Restoration for the USS Hornet, the restoration was intended to be as authentic as possible.

The FM-2 is on display at the USS Hornet museum, along with a new gallery exhibition “Sister Ship Row,” featuring 24 Essex-class aircraft carriers that served during World War II.

Check out the FM-2’s “before and after” photos of the restoration project.