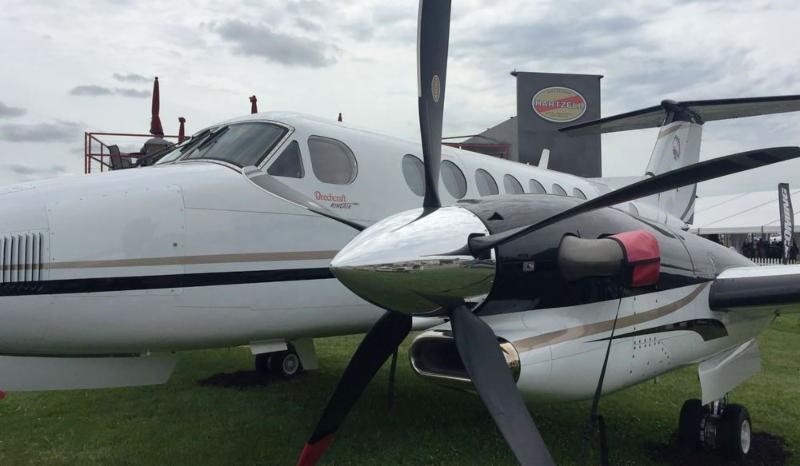 For more than 50 years, Beechcraft’s King Air series has ruled the skies as aviation’s best-selling twin-engine turboprop. Comprised of several different lines of pressurized twin-turboprop aircraft, the King Air line is known for reliability and a superior safety record. With a history that began decades ago, Beechcraft (now part of Textron Aviation) continues to innovate and upgrade the King Air series, with over 7,000 aircraft produced and delivered around the world.

Beechcraft Aircraft Corporation first introduced the King Air concept in 1963 with the Model 90 King Air, which was equipped with a pressurized fuselage and twin turboprop Pratt & Whitney PT6A engines. The first King Air met initial success among corporate private charter services for its cabin comfort and ability to fly at high altitudes. By the late 1960s and early 1970s, the United States and Japanese militaries began using King Air aircraft for reconnaissance and military personnel transportation. In fact, President Lyndon B. Johnson’s first Air Force One was a Model B90 King Air, demonstrating the practicality and comfort of the popular aircraft.

In 1969, the King Air Model 100 was introduced as a larger version of the Model 90. The Model 100 featured increased speed and operating weight capacity, with an additional three feet of cabin space and five cabin windows instead of three.

Beechcraft added to the King Air line in 1973, with the “Super King Air” Model 200, which featured a distinctive T-tail, a longer wingspan with wingtip fuel tanks, a more powerful engine, and increased cabin pressurization. Several military variants were developed for the U.S. Army, Air Force, Navy, and Marine Corps for personnel transport.

After the success of the popular 200 series, Beechcraft set to work developing its successor. The Model 300 was introduced in the late 1980s and featured more powerful engines (PT6A-60A) and a maximum takeoff weight increased to 14,000 lbs. In 1990, the Super King Air 350 (Model B300) was introduced and offered an increased maximum takeoff weight of up to 15,000 lbs.

Although the “Super” was dropped from all 200, 300, and 350 King Air models in the 1990s, many still use the name to differentiate the newer, faster models from their predecessors. Today, Beechcraft produces an impressive line-up of King Air aircraft, including the King Air 350i, 350ER, 250, and C90GTx, used for corporate, private, and government purposes. Over the years, a number of aftermarket upgrades have been introduced to offer performance enhancements for the King Air family of aircraft, including the latest advanced composite propeller blade technology designed and manufactured by Hartzell Propeller in conjunction with Raisbeck Engineering.