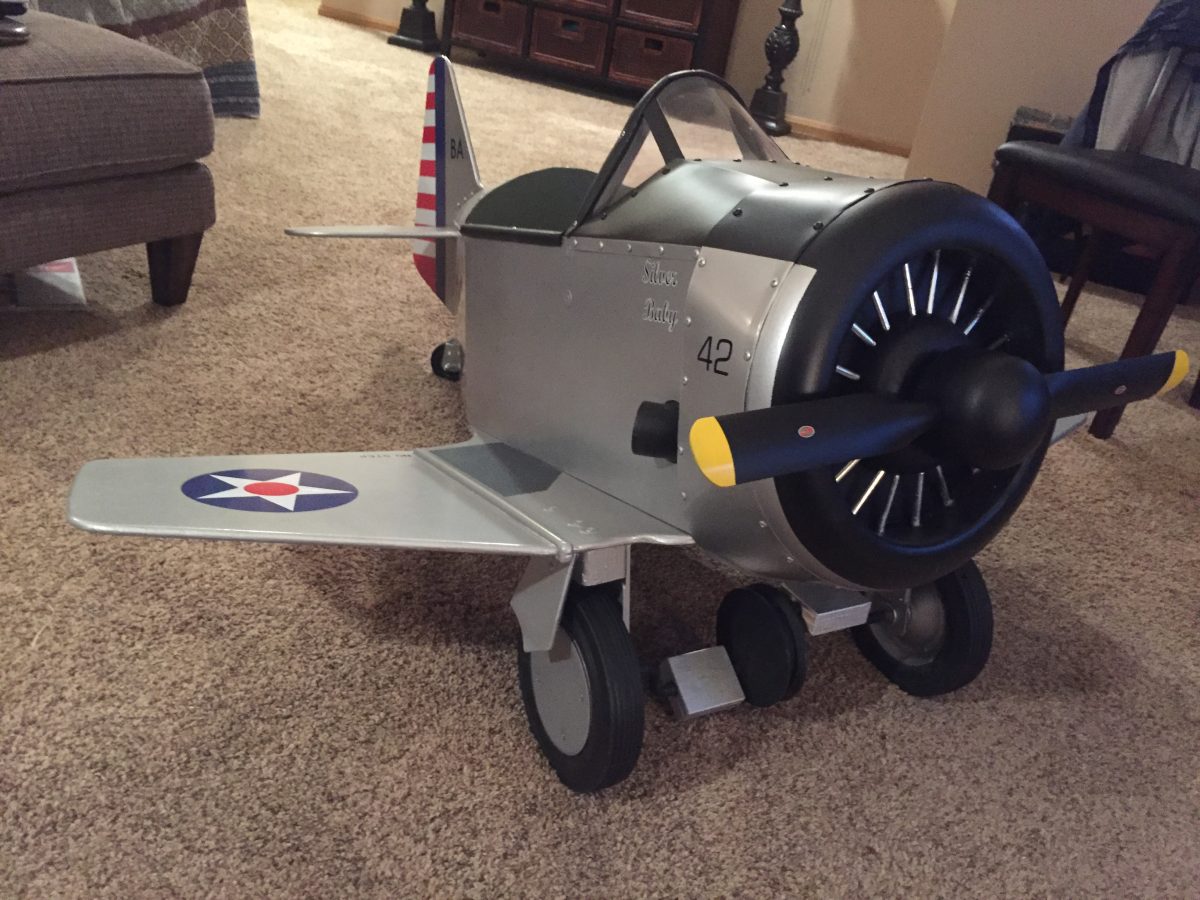 Pilots love to fly. And they love sharing their passion for aviation with others, especially the next generation of flyers.  But how do you inspire a love of aircraft and aviation early?

A company called Pedal Planes has been helping aviation enthusiasts pass on the love of flight to the next generation for over thirty years. If you’re a regular at EAA Airventure Oshkosh, you’ve probably seen the Pedal Planes booth with its realistic replicas of popular aircraft. These pint-sized warbirds are designed to thrill budding pilots from ages 3-7, and can be purchased as plans that you build yourself or as kits that you can put together or have a contractor put together for you.

The kit builder for Pedal Planes, James Wittkamp, reached out to us recently to request some Hartzell stickers to give the replica AT-6 he was building an authentic-looking prop. Intrigued, we asked to know a little bit more about the company, and recently sat down with James and current Pedal Planes owner Gary Sampson to learn more about the company, their kits, and their devoted customers.

Pedal Planes was started in 1985 by Marvin and Catherine Hoppenworth. Marvin was an A&P working for Rockwell Collins at the flight center there. The first pedal plane replica they created was of a Pitts Special, which was made for their son. The pedal plane was so popular that they received multiple requests from friends and colleagues at the flight center to build one for their children. That inspired Marvin to create a prototype and detailed diagrams so that people could build their own. Soon, he was setting up a booth at Oshkosh and displaying a new kit every year. Today, the company has 14 different models, and tries to put out a new one every year to add to their inventory.

While they always considered Pedal Planes a side business, orders were enough to keep the Hoppenworths busy. About ten years ago, Gary Sampson – who knew Marvin from Rockwell – became interested in the business and began helping Marvin create and put together wood kits for the pedal planes. They eventually added hardware and  equipment to the kits so that customers could order all of the parts from the company instead of building the pedal planes from scratch. In 2004, Sampson bought the business from the Hoppenworths to keep him busy during his own retirement.  “Our typical customer is a flyer,” Sampson said, “they have their own airplanes, and a lot of them maintain and build their own airplanes. He’s either the father of the kid that wants the airplane or grandfather. They typically have an airplane at a hanger somewhere that they’ve flown and they’ve wanted to instill the tradition of flying into the family and into the kids. We have a lot of customers now that come up that are thirty years old, that are flying old airplanes and say, ‘I remember when I was at Oshkosh I sat in those things!’ They still remember that. We had a guy that flew a C-17 at Oshkosh last year and he came up and he had to have a photo op with our AT-6 pedal plane because that’s what he remembered coming to Oshkosh for, and seeing that airplane and sitting in it.”

The company’s customers also include both movie stars famous for their love of flying and World War II aces, including Bud Anderson. According to Sampson, Anderson comes by the booth at Oshkosh to visit every year. They gave Anderson’s son a Mustang pedal plane decades ago, and it’s now been handed down through three generations of the Anderson family.

While the company remains a passion project for Sampson, there are plenty of kit-building orders to keep James Wittkamp occupied in his own retirement. To ensure the pedal planes he creates from the plans or kits are accurate, he will often reach out to aviation companies like Hartzell to get the authentic stickers, decals, or verify the paint colors he needs.

“If they (the customers) don’t have the tools, time, or expertise,” Wittkamp said, “Gary gives them my name and then they send me all the stuff. I put them together for the people, get them painted, and ship them back complete to the customer.”

Wittkamp estimates that the company has sold over 40,000 sets of plans since he began, and at least 10-12,000 kits. These pedal planes have been shipped all over the world, including England, Germany, New Zealand, and Mexico. It’s a unique gift for any child, especially the child of an aviation enthusiast. Adults love them for the authenticity and attention to detail, and kids love them because they’re just plain fun.

If you’re looking for a pedal plane to inspire a promising young aviator-to-be in your own life, you can contact the company through their website or email them directly at pedalplanes@gmail.com.

(Image credit: AT-6 kit completed by by James Wittkamp for a Pedal Planes customer. Prop decals provided by Hartzell)