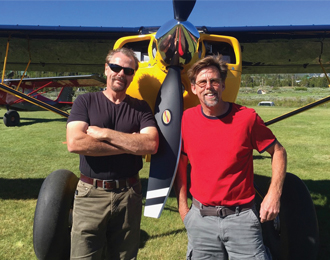 Kasey “Bonecrusher” Lindsay and Bob “Hurricane” Hannah don’t just sell airplanes. As experienced pilots and aviation enthusiasts, they go above and beyond to make every airplane purchase a fun and memorable experience for their customers.

In the 1990s, Lindsay and Hannah both retired from their day jobs to pursue careers in aircraft sales. Lindsay, a one-time chiropractor and real estate developer, first discovered a love of flying at age 15. Hannah was a former professional motocross and Supercross racer, a seven-time AMA champion. Later, he got into air racing, flying a modified P-51 Voodoo in the Unlimited Gold Class in the Reno Air Races. For years, the two were friendly competitors in the light plane business, until they realized they could join forces and turn their shared passion into a successful and personally rewarding business.

Northwest Backcountry Aircraft is all about taking customer service to new heights. “A typical demonstration day with us is all day,” Lindsay says.

Hannah adds, “We take customers flying all day with two to five airplanes to backcountry strips. We go to the places that the customer sees themselves using the airplane. By the time a customer leaves, they really know the airplane they’re purchasing. It’s like bush plane boot camp.”

Lindsay goes on to explain that the Hartzell carbon fiber composite two-blade Trailblazer propeller is well suited for the aerobatic and bush planes offered at Northwest Backcountry Aircraft. He says, “The Hartzell Trailblazer changed our business. We tested the Trailblazer back-to-back in a very controlled study, and the performance is unquestionably better in all parameters.”

Lindsay adds, “After three years on at least 25 planes, we’ve had zero issues. It’s the only prop we order!”

Northwestern Backcountry Aircraft has a robust and ever-changing inventory of backcountry and aerobatic aircraft to fit the needs of any adventure-seeking pilot.