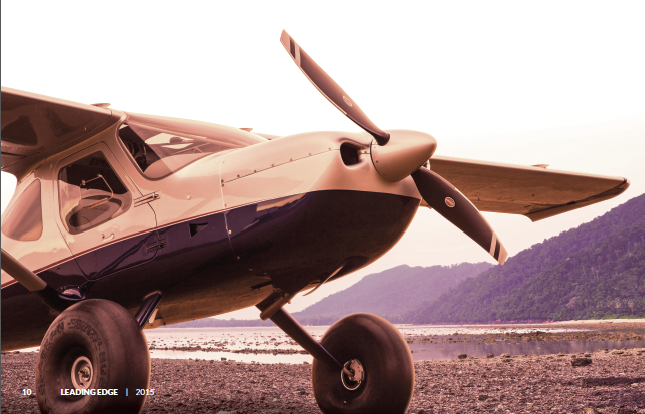 The Frank Church – River of No Return Wilderness covers 2.3 million acres of central Idaho. Within its bounds are mountain ranges, pristine coniferous forests and the white water rapids of the Salmon River, from which the area derives its ominous title. The most remote points are accessible only by foot, horseback, powerboat or aircraft.

Though the wilderness is named for its treacherous river, landing a plane among its towering pines is not a challenge for the faint of heart. Those who have never seen an experienced backcountry pilot might think it impossible, but Jim Taylor, Sales Manager at McCreery Aviation, has done it.

Jim still remembers the first time he flew over “The Frank” and the way its hills and valleys stretched out to meet the horizon. Though it was only an hour flight from surround-ing cities, the land’s sprawling beauty felt completely remote. Jim knew then that he would return to visit one of the area’s remote wilderness airstrips, but it would take another seven years and thousands of hours in the cockpit of a Husky before he finally made the descent.

“You are surrounded by terrain and some of these airports are one-way-in and one-way-out because there might be a big mountain at the end, so you have to be pretty sure about your airmanship,” explains Jim.  “You have to be familiar with your surroundings and kind of be able to fly almost subconsciously. It is a completely different level.” 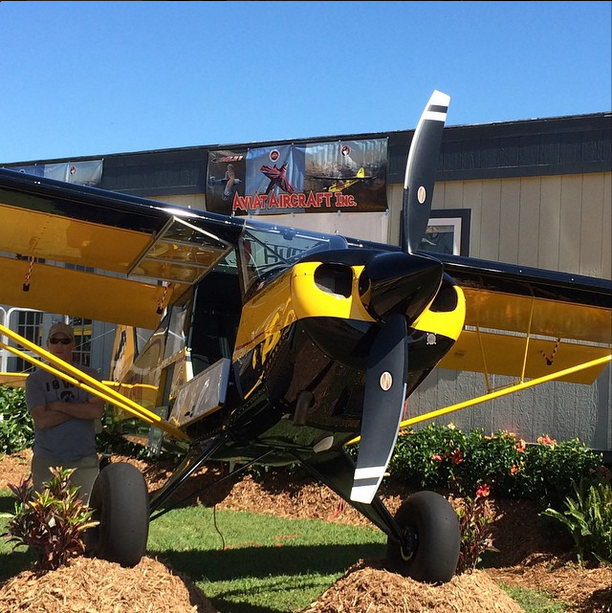 Jim has sold hundreds of Husky aircraft through his work at McCreery aviation. For many pilots, the retro-looking taildragger is not their first plane. The majority of his customers have looked out the window of a turbine aircraft and realized that everywhere looks the same at 40,000 feet. They have discovered what farmers, ranchers, outdoor adventurers and so-called “bush pilots” have known for generations: the real excitement is closer to the ground.

“It lets people go to places that they have just flown over in their other airplane and experience things they have never done before,” says Jim. “It is kind of like, they can stay at the finest hotels — but they decide that what they really want is to go backpacking.”

The opportunity to explore valleys and vistas inaccessible to other aircraft has also made backcountry flying a favorite of professional pilots. When he isn’t working as a commercial pilot for Delta, John McClanahan takes his Husky into the small, private airstrips surrounding Atlanta, GA. These airstrips vary widely in length and condition, ranging  from the benign to the extremely challenging.

“It’s a totally different kind of flying. You sneak up on an airport like that,” explains John. “You don’t just fly in there and land, you have to make sure the runway is clear. Check that there’s no cows, or deer or anything like that. Quite often there is no wind sock, so you are just checking for some smoke or movement of water to tell you what is going on with the wind. You have to plan to accomplish it safely.”

It isn’t just the element of challenge that drew John to backcountry flying. It has given him a chance to meet many interesting people. There is a community of aviators that is only accessible to pilots who can reach remote and private airstrips. John sees it as a kind of club, and he is a member.

“It’s interesting to just be able to drop into any little airstrip you see in the country, get out, walk around, talk to people and then take off again,” says John. “It’s fun to fly low and slow and to look at the scenery instead of cruising at high altitude.”

John calls this style of  flying “dirtbiking,” and, despite the obvious differences between his Husky and a Delta airliner, he feels it has made him a much better pilot. Flying a taildragger, like a Husky or a Super Cub or a Sportsman, requires pilots to be constantly aware of wind direction and yaw. John compares taxiing in his Husky to pushing a shopping cart backwards — the back is constantly trying to spin around to the front.

“It’s not something to be afraid of, but you definitely have to respect every moment that aircraft is in motion,” says John.

Though he believes there is value in learning to fly an aircraft like the Husky, John understands why the vast majority of his commercial peers have never given it a try. Taildraggers fell out of fashion in the 60s due to the increased skill it takes to handle them in crosswinds. Over time, they were replaced as trainers. Most mod-ern pilots have never had the opportunity to learn, and gaining the skill is no easy task. John estimates he prac-ticed landing over 150 times before he felt comfortable in his Husky, and Jim says the importance of practicing habitually is the number one piece of advice he gives to would-be bush pilots.

“You don’t go flying into an 800-foot-long strip on the side of a mountain without having a lot of practice,” warns Jim. “Pilots should ask themselves if they have time to do that.”

Difficult short takeoffs and landings have given backcountry flying a reputation for danger. But both John and Jim feel their aircraft are incredibly safe. The Husky has full aerobatic harnesses, airbags and a fuselage that protects pilots and passengers much like the rollcage of a race car. One of John’s favorite things to do is taking young people, such as his grand-kids, out for flights in his Husky, though he says he wouldn’t feel comfortable in a taildragger with fewer safety features.

“I take them up and they’re always extremely excited,” says John. “We fly into some little strip that they couldn’t imagine an airplane could come into, then go somewhere and get a hamburger or something. It’s really eye opening and motivating for them.”

Jim and John both fly with Hartzell Propeller’s advanced composite Trailblazer prop, which was designed with backcountry applications in mind. The Trailblazer reduces weight and “pulls” harder than a traditional propeller. This helps the aircraft take off quicker and improves the angle of climb. These are critical performance metrics for pilots looking to safely take off from short strips, but they are also a big part of what makes backcountry flying so uniquely enjoyable. Under ideal conditions, Jim estimates that he can get a Husky off the ground in just six seconds.

Enthusiastic responses like this are fueling new interest in taildragger aircraft, and groups around the country have formed to ensure future generations can experience the thrill of backcountry flying. The Recreational Aviation Foundation (RAF), a 501(c)(3) nonprofit founded by a group of Montana pilots, is leading the charge. The RAF advocates for the preservation of backcountry airstrips and the creation of new ones. Currently, they have advocates in 30 states across the U.S.