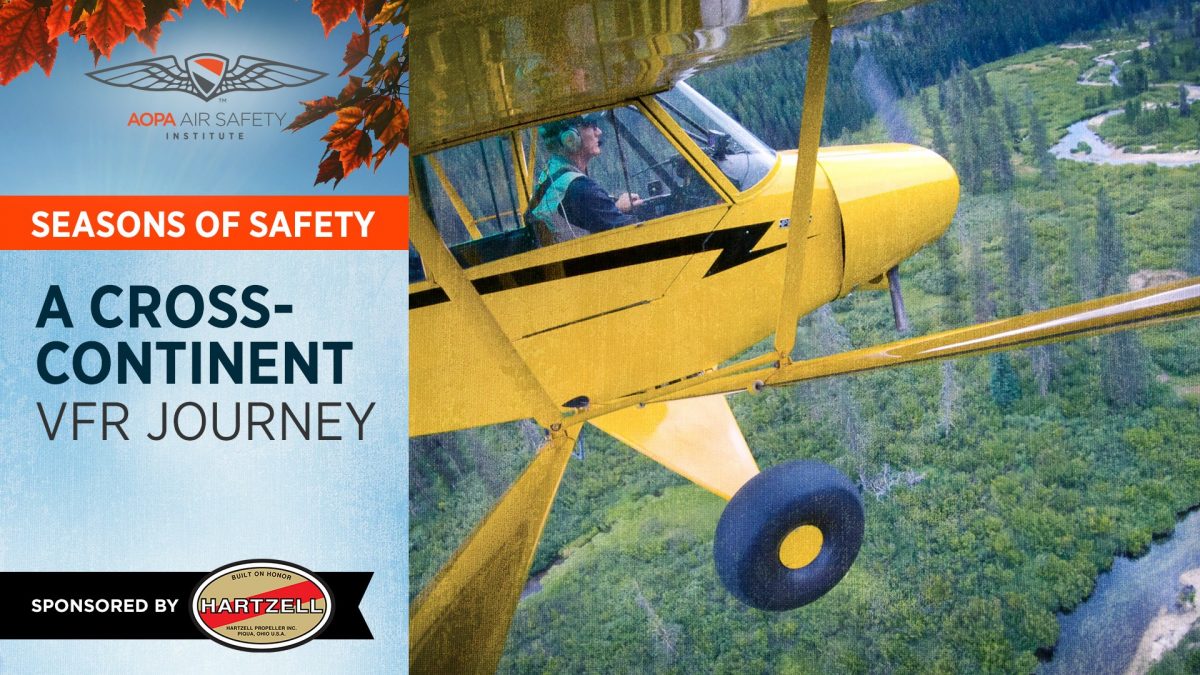 At Hartzell Propeller, we have a love of flying and an even greater passion for flight safety and pilot proficiency. That’s why we’re proud to sponsor the AOPA Air Safety Institute’s (ASI) newest video series, “Seasons of Safety.” The four-part live webinar series focuses on the seasonal challenges of staying a safe, proficient pilot.

Richard is a highly experienced pilot who has over 5,000 hours in 30 years of flying a variety of military and civilian aircraft. But, it’s not every day that you ferry an inactive light GA airplane from New Mexico to Maryland. If you’ve ever been interested in flying a long-range, cross-continent journey, this episode is a great starting point to learn about the unique challenges and rewards involved.

Here are some of the top flight safety reminders and lessons Richard shared:

In preparation, Richard took the time to identify potential risks and special considerations for his trip. When assessing risk, it’s important to follow the PAVE checklist, which stands for Pilot, Airplane, EnVironment, and External Pressures.

Pilot: Before flying, understand how proficient you are in the type of airplane you plan to fly and the type of flying you plan to do. If you’re flying a cross-continent route, are you comfortable with backcountry flying skills? If not, take some time to refresh your skills and knowledge. Richard says he practiced stalls, canyon turns, and other maneuvers in the SuperCub with an experienced friend to build his backcountry confidence.

Airplane: Ensure the airplane is airworthy. How many hours does the airplane have? When was its last flight? Was it in a hangar or parked outdoors? When was the last oil change?

Since Richard’s Super Cub was inactive, he took extra time to inspect the engine. He used a borescope camera to look for rust or corrosion on the top of the engine and consulted with A&P mechanics before flying the airplane.

EnVironment: When planning an extended trip, you’ll need to plan the route and timing carefully. What’s the terrain like? What kind of weather and wind can you expect? Is the airspace busy? Do you have alternative flight path options? Be prepared for contingencies that may throw you a curveball.

External Pressures: When planning an extended flight, Richard says that flexibility is crucial. Because he gave himself plenty of time to make the trip, he wasn’t pressured by passengers or “get-home-itis.” Having this high level of flexibility makes long trips much more enjoyable and will help keep you from making unsafe decisions in an effort to get somewhere quickly.

Survival gear is essential for long, backcountry flights. As Richard says, camping gear is what’s in the back of your airplane; survival gear is what you have on you. He wore a survival vest with energy bars, water, personal locating beacon, and satellite phone. In the back of the plane, he kept water, a small tool kit, battery packs, a camping stove, and a sleeping bag and tent.

Next, consider the flight planning apps and tools you’ll need and get proficient in using them before your trip. Richard says he used the Garmin GDL 52 receiver for weather, GPS, traffic updates and music, ForeFlight for flight planning, and the Windy.com app for information on surface and en route winds.

Backcountry flying is an experience like nothing else. It’s rewarding, but it’s also very challenging. You’ll need to factor in changes in altitude, density altitude, winds, turbulence, and aircraft performance in the backcountry environment. Know your airplane’s systems and limits so you can plan accordingly.

As Richard notes, flying solo doesn’t mean flying without support. The general aviation community is welcoming and supportive, so you’ll likely come across folks who are happy to assist if you need help.

Looking for more flying safety tips? Be sure to subscribe to the ASI’s YouTube channel, so you never miss a “Seasons of Safety” video!