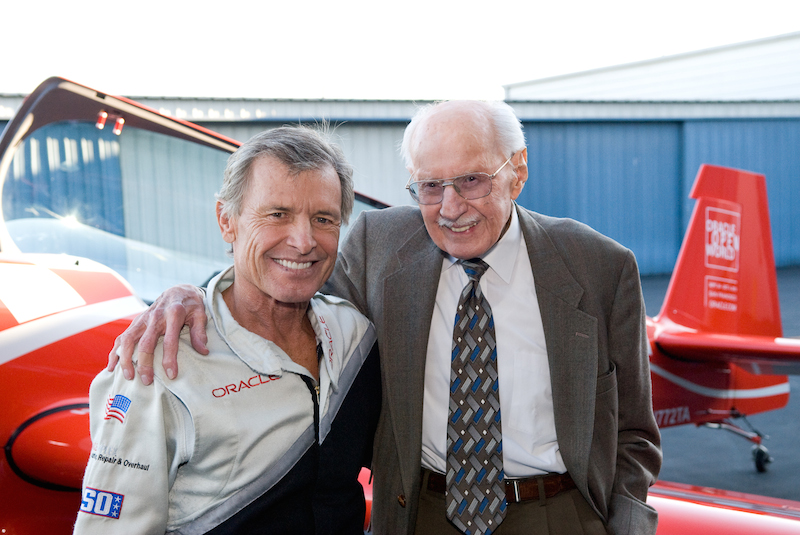 On March 8, the Aircraft Owners and Pilots Association honored Sean D. Tucker for his contributions to general aviation at the second annual Bob Hoover Trophy Reception. The event was held on the evening of March 8th at Ronald Reagan National Airport’s Historic Terminal A Lobby in Arlington, Virginia (our own Joe Brown, President of Hartzell Propeller, was also there.)

Tucker was chosen to receive the 2017 AOPA R.A. “Bob” Hoover Trophy by unanimous agreement of the selection committee, and the wish of the late flying icon himself. He is being honored for demonstrating the airmanship, leadership and passion for aviation that Hoover exhibited during his distinguished career and life as a pilot and aviation advocate. Hoover passed away last year at the age of 94 and was the first recipient of the Hoover Trophy.

“I consider the Bob Hoover Trophy aviation’s highest honor,” Tucker said in an email from the Canadian Rockies where he was heli-skiing. “I had the privilege of being mentored for 35 years by Bob, not only in my flying but more importantly on how to be a better human being. I am humbled, but also empowered by this recognition.”

Tucker has been flying airshows worldwide since the mid-’70s and has won numerous aerobatic competitions. In that time, he has flown more than 1,200 performances at more than 475 airshows, in front of more than 105 million fans. Tucker, who got his start in aviation as a Salinas Valley crop-dusting pilot, has logged well more than 20,000 flight hours. Named as one of the Smithsonian Institution’s Living Legends of Flight, Tucker is a member of an elite group of aviators and astronauts that includes generals Jimmy Doolittle and “Chuck” Yeager, and John Glenn.

Tucker, who flies the bright red, highly modified, Team Oracle Challenger III bi-plane, typically practices his airshow routine three times every day during the season. To endure the extreme physical demands of each routine, Tucker maintains a rigorous physical training schedule, working out more than 340 days per year. “I like to think that I bring the fans’ dreams of flying into the plane with me and there’s nowhere I’d rather be than in the cockpit,” Tucker has said. “That’s why I train so hard to keep a finely tuned edge.”