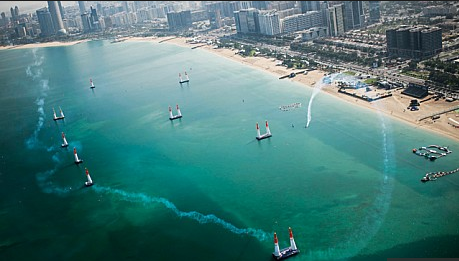 The skies over Abu Dhabi came alive for the first air race Red Bull Air Race of 2015. The golden sun and scenic seas made for a beautiful course, but presented pilots with serious challenges. Shifting winds and soaring temperatures made every flight in Abu Dhabi unique and difficult. Several pilots were eliminated by penalties and pylon hits in the early rounds when the winds changed abruptly during their runs.

After the first day’s elimination rounds, the field was narrowed to eight pilots. The first race of the semi-finals pitted Hannes Arch against Peter Besenyei, with Arch claiming victory. Next,  Pete McLeod defeated Yoshihide Muroya. Nicolas Ivanoff and Matt Hall had the third race of the day, with Hall moving on to the finals. Paul Bonhomme scored an upset over Nigel Lamb, the defending world champion, to round out the Final 4.

Bonhomme was favored to win as the racers assembled for the decisive final round of competition. He claimed victory in Abu Dhabi during the 2014 season and put up the fastest time in during the elimination rounds. Before Bonhomme could claim the top spot on the podium, however, he needed to defeat Hall, who trailed him by less than a second in the Group of 8. The two pilots seemed perfectly matched in their final runs. The winner was decided by a less than .08 seconds. It was Paul Bonhomme who emerged victorious, followed by Matt Hall, Pete McLeod and Hannes Arch.

The racers will have an lengthy break before the circuit resumes on May 16 in Chiba, Japan. Some will fine tune their aircraft, others will hone their strategy, but they will all have glory on their minds when the world’s fastest motorsport returns in less than 80 days.