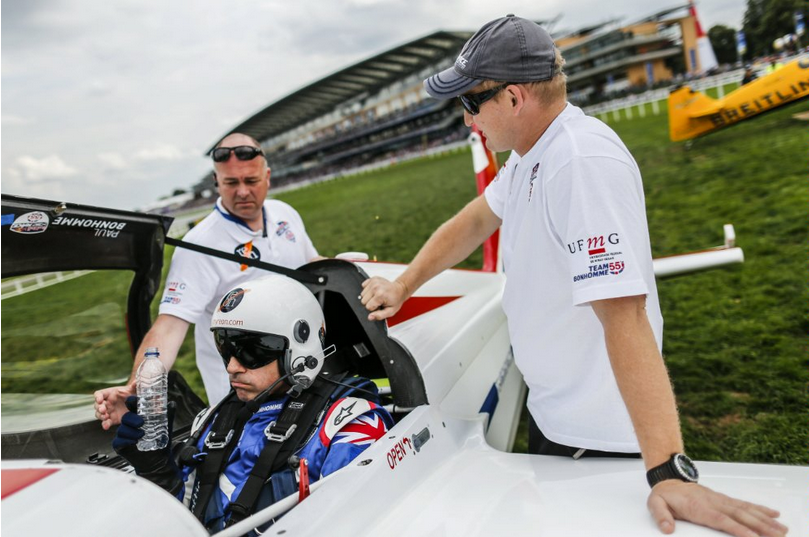 An overcast sky hung over the historic Ascot Racecourse this weekend as spectators looked on in awe of the scene laid out before them. The world’s fastest motor sport, the Red Bull Air Race, arrived in Ascot, England, this weekend for its fifth stop on its prolific global tour.  Once again this year, Hartzell Propeller is the propeller technical partner of the racing series.

The Ascot Racecourse has quickly become a memorable stop for all of the racers in the Red Bull Air Race tour. Founded in 1711  by Queen Anne and located a mere six miles from Windsor Castle, Ascot Racecourse is a historic piece of England’s national history. Expectations were high at the raceway as overall World Standing leader, and English native, Paul Bonhomme made his long-awaited trip to his homeland. Bonhomme was the reigning champion of the Ascot course and expected nothing less this time around.

As the race ran through its duration, the field quickly dwindled away and soon, only four racers remained: Japan’s Yoshi Muroya, France’s Nicolas Ivanoff, Australian Matt Hall, and national favorite Paul Bonhomme, who posted many of the fastest times throughout the weekend.

After four thrilling showings by the respective pilots, the final standings were released. To the delight of the crowd, Paul Bonhomme emerged victorious with a time of 1:06.416. Bonhomme was followed by Matt Hall, who finished with a time of 1:09.024, and Yoshi Muroya, who earned his first podium of the season. The win solidified Bonhomme’s place atop the World Standings as he upped his total to 46 points, 8 points above the second place Matt Hall’s total of 38.  See the complete results here.

The Red Bull Air Race’s next stop will be in Spielberg Austria on September 5th and 6th. Viewers will sure to be tuned in to see whether Bonhomme can continue his run of dominance on the circuit this year.