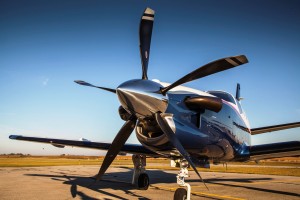 “Carbon composite, due to its incredible strength and light weight, allows Hartzell’s design group the freedom to optimize blade chord thickness and sweep while still achieving maximum strength. That’s the key: thin, light and strong, leading to unmatched performance,” he added. “The strong structural composite construction of these carbon fiber blades and their sleek aerodynamic design boosts the TBM’s already impressive performance to an even higher level.”

Hartzell received FAA and European Aviation Safety Agency (EASA) Type Certificate (TC) approval for the propeller in 2013. Hartzell offers the new prop with a “Plus 3” warranty, which covers the propeller for a full three years or 1,000 hours and a 3,600-hour/six-year TBO (Time Between Overhaul). The new propeller is available directly through Hartzell’s Top Prop conversion program (www.hartzellprop.com) or through DAHER-SOCATA’s distributor network: (tbm850.com/Support-Network).

DAHER-SOCATA’s TBM 850 is the world’s fastest single turboprop aircraft, with a maximum cruising speed of 320 KTAS at Flight Level 260 (in ISA conditions). It combines cruising speed and trip times of a light jet with the economic direct operating costs, range and moderate environmental signature of a turboprop engine. The maximum range and useful load – which are enhanced on the current version – as well as the ability to land at small airports, are some of its customers’ favorite features. TBM 850 Elite offers owners the unique capability of tailoring the cabin to host four or six persons on board. Since its launch in 2005, the TBM 850 has become an international success, with 338 units delivered as of Dec. 31, 2013. As of that date, the overall TBM 700/850 fleet – totaling more than 662 aircraft – exceeds 1.1 million flight hours.

Hartzell Propeller is the leader in advanced technology propeller design and manufacturing with more than 3,700 propellers delivered annually to business, commercial and government customers. The company developed the next generation of propellers with innovative “blended airfoil” technology. It manufactures these blades using a combination of revolutionary machining centers and robotics. With its ASC-II™ composite technology, Hartzell provides mission-optimized performance for customers. Hartzell Propeller traces its beginnings in 1917 to a business relationship with Orville Wright and was founded on the principle of “Built on Honor” – a tradition that continues today.