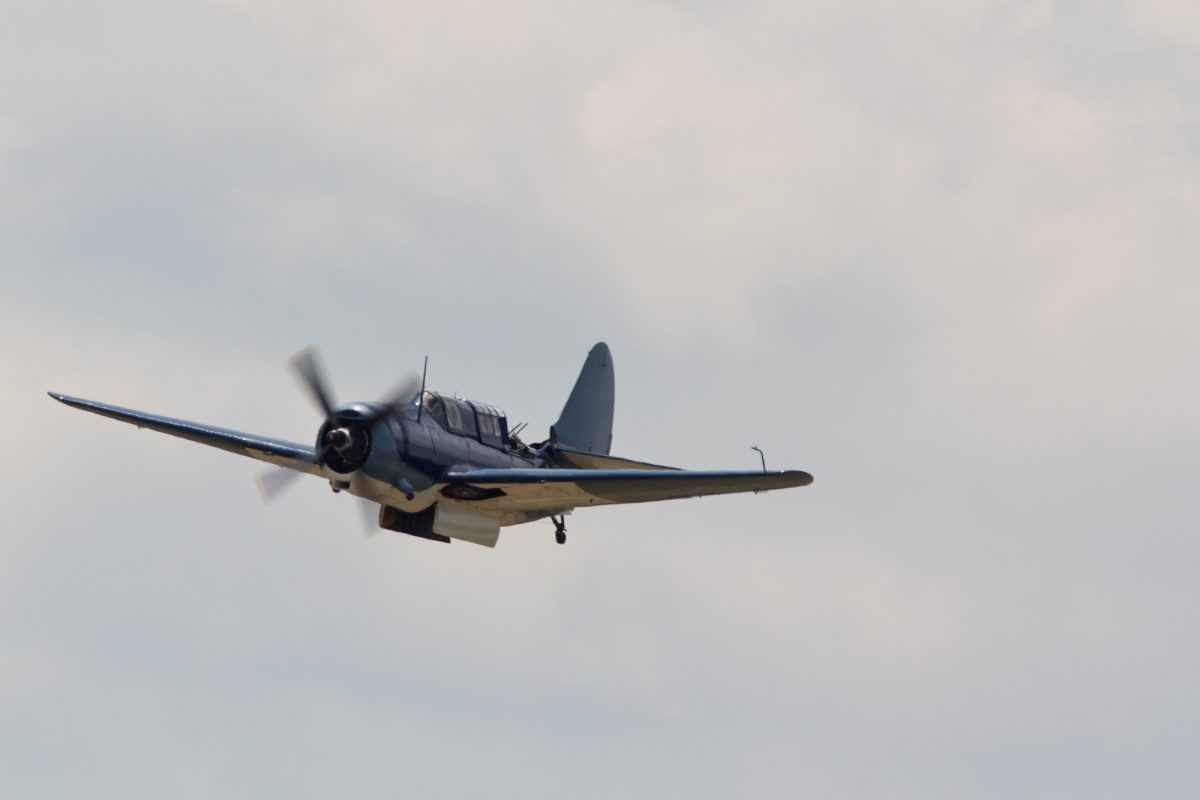 During World War II, the U.S. Navy used dive bombing as one of the most accurate ways to attack enemy targets, including naval vessels. Dive bomber aircraft would dive in at a steep angle directly at the target, then pull up abruptly after dropping its bombs. The tactic proved highly useful because it allowed pilots to maintain visual contact with their target for a more precise aim.

One of the last WWII aircraft explicitly produced for naval dive bombing was the Curtiss SB2C, known as the Helldiver. Requested by the U.S. Navy in 1939 as a replacement for the Douglas SBD Dauntless and the Curtiss SBC, the Helldiver went on to become the front-liner of the Navy’s efforts. By the end of the war, the Helldiver was responsible for sinking more tonnage of Japanese warships in the Pacific than any other Allied aircraft.

A metal, two-seat, single-engine monoplane, the SB2C was equipped with an internal bomb bay capable of carrying a 1,000-pound bomb, plus two 100-pound bombs under the wings. Early prototypes offered foldable wings for better storage on aircraft carriers, though this feature was later discontinued. Fitted with a Wright-powered radial engine, the Helldiver was capable of a max speed of 260 mph. The aircraft also offered a longer range than the Dauntless, making it useful for naval operations.

Although it was bigger, faster and offered a better carrying load and range compared to its predecessors, the Helldiver was widely considered unpopular and poorly designed. Nicknamed the “Big-Tailed Beast” by pilots and crew, the Curtiss SB2C Helldiver had a reputation for being difficult to handle, underpowered, and structurally weak. The first airplanes produced had design flaws leading to several crashes. In fact, early versions had so many problems that the U.S. Navy refused to use the Helldiver until more than 880 modifications were made.

Eventually, the Helldiver made its combat debut in 1943 from the USS Bunker Hill carrier, when bombing squadron VB-17 attacked Japanese targets at Rabaul, on the island of New Britain. Over time, the Helldiver’s design was modified and improved. With the introduction of the SB2C-4, the Helldiver proved to be a valuable asset to the Navy, especially in aerial attacks against the Japanese Navy. In the later years of the war, the need for dive bombers diminished as more advanced, versatile fighter aircraft arrived. Production ceased after the war, with a total of 7,140 Helldivers turned out by the Curtiss-Wright Corporation. The aircraft used by the U.S. Navy and Naval Reserve leading up to the Cold War, and the last Helldiver was finally removed from active inventory by 1949. Today, only one known Helldiver remains airworthy, an SB2C-4 which was restored by the Commemorative Air Force. A handful of surviving SB2Cs are undergoing restoration, and several can be found on display in museums around the world.