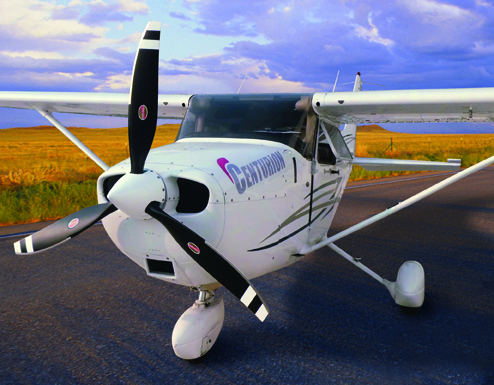 Here’s How a Constant-Speed Propeller Works

Today, propeller governors are fitted to propellers to automatically change their pitch, which helps keep engine speed constant. In newer models, the actions of the constant-speed propeller are achieved by pumping oil through the propeller shaft, which pushes a piston that controls the mechanism that alters the pitch of the blades. As air speed increases, flyweights pull outward, compressing the speed spring, which moves the piston forward and allows the pilot valve to open on the oil sump and release oil in the governor hub.

It’s the propeller governor that controls the flow of this oil. This mechanism allows the engine to continue operating at its optimum speed, no matter what the actual speed of the aircraft itself as it moves through the air. This increased oil pressure alters the propeller pitch, slowing it to the correct RPM setting for optimum performance. As airspeed is lost, this process happens in reverse: the flyweights move inward, tension releases the spring, and the piston moves in the opposite direction, allowing oil to flow from the hub back to the oil sump.

So, there you have it. Constant-speed propellers today will automatically change the pitch of your propellers many times as you fly without you even noticing it, increasing the overall fuel efficiency and performance of your aircraft.