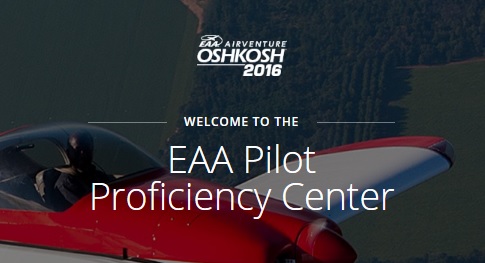 Are you attending EAA AirVenture Oshkosh 2016? If yes, you’ll have the opportunity to improve your current flying skills or learn new ones in programs offered at the EAA Pilot Proficiency Center – and it’s all included with your Oshkosh admission! EAA and its partners (including Hartzell) are bringing back the popular training venue, now offered in the enhanced EAA Four Corners.

The Pilot Proficiency Center is a skill-building resource and gathering area for those who want to develop their skills and network with other pilots. It will feature Tech Talks, Redbird flight simulators with IFR and VFR flight scenarios, and the opportunity to speak with certificated flight instructors about how to become safer and more proficient in all areas of flying. The Pilot Proficiency Center will be open throughout the entire week of Oshkosh, which runs July 25th through 31st.

While you’re there, find out how to get involved with the EAA IMC Club, which is dedicated to improving the skills of instrument-rated pilots. EAA IMC Club Programming information will be available in the Pilot Proficiency Center lobby. One of the featured activities are the Tech Talks, which are daily forum-style presentations about different topics attendees can use to improve their flying skills. Topics will include crosswind landings, situational awareness, and radio communication. Campers can also take advantage of Early Bird Tech Talks available on Tuesday through Thursday from 7-9 a.m. Buses are available from the campgrounds to the convention grounds starting at 6 a.m.

Redbird Flight Simulations is providing 12 LD simulators, as well as a full-motion MCX and Cross Wind trainer with over 30 scenarios. The Tech Talks and flight scenarios are all eligible for FAA WINGS credits. These credits are part of the FAA’s ongoing program to help pilots gain expertise and proficiency in various areas of aircraft and flight operations. A complete schedule of Tech Talk sessions, a list of scenarios, and more information about the center can be found here: http://www.eaapilotproficiency.com/.