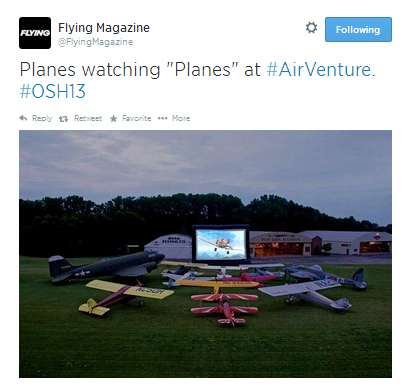 Today we continue our look back at some of the best moments of EAA Airventure – Oshkosh 2013. Last year, Disney made several appearances at Oshkosh to promote the movie Planes. The results delighted young Oshkosh attendees, and made for some great photos, including one of a group of planes “watching” the film.

Promotional events like this might seem cheesy, but the response from kids at the show was completely authentic. Disney engaged young people and helped them visualize the amazing sensation of piloting an aircraft. Getting young people involved in aviation has always been a major priority for everyone here at Hartzell HQ in Piqua, OH. Plus, the film features a fictional worldwide air racing circuit not unlike the one utilizing Hartzell’s top of the line Claw props. (Hint: it is the world’s fastest motorsport).

Could “planes watching Planes” at Oshkosh 2013 have inspired the next generation’s Michael Goulian? We hope so. If it did, they can count on Hartzell’s support.