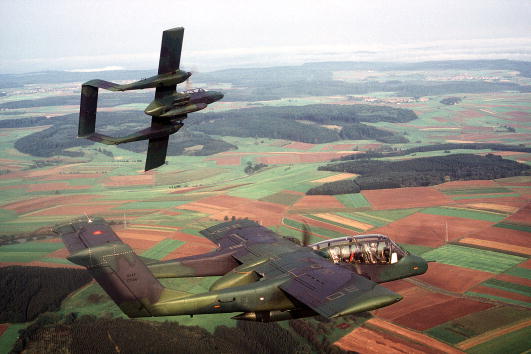 Sometimes older aircraft can offer successful solutions for challenges in modern warfare. That’s certainly been the case with the Vietnam-era OV-10 Bronco, a propeller-driven warbird that’s been given new life covering U.S. ground troops in the Middle East.

These warplanes were flown by naval aviators back in May of 2015 for a total of 82 days, in which they completed 134 sorties and 120 combat missions. It turns out that in the international campaign against ISIS in remote regions, these aircraft are proving to be reliable workhorses.

The OV-10 Bronco has the ability to take off quickly, fly low, and best of all – is small and comparatively cheap to build and operate. The cost difference is staggering, as an F-15 fighter jet can cost up to $40,000 to operate per flight hour, while the Bronco can operate for as little as $1,000 per flight hour.

According to Air Force Captain P. Bryant Davis, a Central Command spokesperson, the purpose of the trial was to find out if turbo-prop driven aircraft could be more effective in counter-insurgency operations than modern aircraft.

In current conflicts, the Bronco’s slower speed – it cruises at 223 MPH compared to an F-15’s 500 MPH – could make it a target for anti-aircraft missiles. However, in areas without access to this type of machinery, like many areas of Iraq and Afghanistan, the Bronco has no such disadvantage. It also offers pilots greater visibility of the battlefield. Modern, faster aircraft are often moving at such a high clip that pilots can miss what’s happening on the ground.

While the aircraft performed well during its 82-day mission, the U.S. government has yet to commit to placing new orders for vintage planes. Cost savings would only really come about if they ordered hundreds of Broncos, and it can be difficult to admit that sometimes cutting-edge aircraft aren’t always the most suited to every conflict. That said, there’s a high likelihood that vintage turbo-prop aircraft could find additional support niches in modern conflicts.