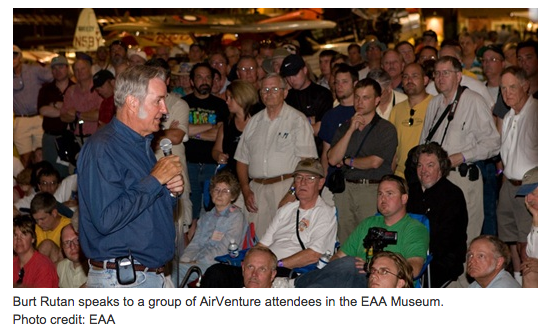 Burt Rutan is a legend of aerospace engineering. His talented mind has spawned so many game-changing aircraft that any attempt to list them all is bound to come up short, although a few of his record-breaking planes are particularly special to us. [Link to Burt Rutan article on Voyager] Among his most recent achievements, Rutan contributed the concepts that would later become the X-Prize winning SpaceShipOne and its successor, SpaceShipTwo.

This year, Oshkosh is honoring Rutan on the 40th anniversary of his iconic VeriEze. When the composite canard-style aircraft made its debut at Oshkosh 1975. The unique carbon fiber design ignited the show and proved so popular that Rutan began selling the plans as a kit. Hundreds have been built in the intervening years. At the height of their popularity the VeriEze the Long-EZ, a plane derived from the VeriEze, were the most prolific homebuilt aircraft in the United States. Today there are over 1,000 aircraft based on his designs being flown domestically.

Burt will be appearing at several events throughout Oshkosh 2015, here are some of the places you can catch this titan of aviation: