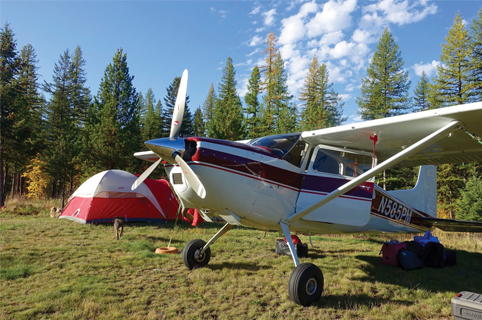 Protecting the Future of Recreational Aviation

The Recreational Aviation Foundation (RAF) preserves, maintains and creates airstrips for recreational access. We recently sat down with RAF founder and chairman, John McKenna, to find out more about the organization and its efforts to protect the legacy of backcountry flying for future generations of pilots.

HARTZELL: How did the Recreational Aviation Foundation get its start?

JOHN McKENNA: The idea for the RAF was first conceived in 2002. There were a half dozen of us sitting around a campfire on a backcountry airstrip in Northwest Montana when we realized that there was no national organization to take care of these recreational airstrips and protect them from the threat of closure. We convinced ourselves that we could do something about it. We each put in a few bucks and formed the Recreational Aviation Foundation with the goal that we would protect, preserve, maintain and even create new airstrips. We spent the early years largely just finding people who shared our idea, which wasn’t hard. Lots of people thought it was a great idea, and wondered why no one had thought of it before. We thought, if we don’t do it, who will?

HARTZELL: How has the organization grown over the years?

McKENNA: The RAF was officially incorporated as a charitable organization in 2003, and today there are just short of 10,000 members worldwide. When I look back on how we started and what the organization is today, I don’t think we’d be where we are without the donation of an airstrip called Ryan Field. Not long into the organization’s lifetime, a husband and wife – Ben and Butchie Ryan – decided they would like to see their 160-acre property and airstrip preserved and maintained for future aviators. They donated an idyllic piece of property to the RAF. It’s completely surrounded by United States Forest Service and it’s about a mile from the entrance to Glacier National Park. Today, Ryan Field symbolizes the RAF’s mission and what we’re all about. We have an annual fly-in there and 50-60 airplanes show up. It’s like a big family reunion.

HARTZELL: It seems that backcountry pilots are a very close-knit flying community. How do you think this has benefitted the strength of the RAF?

McKenna: Much of what we do is about fostering a sense of community among people who really love aviation. We’ve really maintained that family-like culture, and that extends to our donors as well. Everyone who makes a contribution of any size to the RAF is sent a handwritten thank you note written by one of our volunteer “Vice Presidents of Appreciation.” We’re completely run by volunteers who give their time, talent, and resources to support our mission.

HARTZELL: What does maintaining airstrips involve? What are some of the tasks that RAF volunteers do?

McKENNA: We’re sort of like the parks department for aviation. Most of the assets on public lands have been there a really long time, since the early 1900s, and they’ve been neglected. We want pilots to be able to camp, set up a tent, take a shower, go on their mountain bike, take a hike and really get the chance to enjoy nature.

At the top level, maintaining airstrips means having permission to maintain them. We work with public land managers, like the National Park Service, to develop maintenance agreements and we spent a fair bit of time building the relationship that led to these agreements. Then, we can do the “boots on the ground” work. We’ll partner with EAA chapters, state and local pilot associations, and flying clubs to do everything from building pilot shelters and shower facilities to setting up picnic tables and clearing out brush. Our volunteers do everything. You’re just as likely to find one of our volunteers with a suit and tie on in Washington D.C., advocating to protect these airstrips, as you are to find them in their leather gloves and work clothes, helping dig the fence post hole that they were permitted to put in.

HARTZELL: We hear that your aircraft of choice is the Cessna 185. What do you like about this particular airplane?

McKENNA: I fly a 185 because it’s kind of like the pick-up truck of airplanes. It’s durable, utilitarian, fast enough to go someplace, simple in its design and fun to fly. There’s not a lot that changed in the design over time; it was a good airplane when they first built it and it has stood the test of time. It has a real faithful following but in my case, I didn’t buy the airplane just for backcountry flying. I bought I could use in a lot of roles, including traveling for my job. I’m just as comfortable flying it in a suit jacket as I am in hiking boots and a wool shirt. I like on weekends, I can just remove my briefcase and load my camping gear.

HARTZELL: Why is backcountry flying important to you?

McKENNA: To me, it borders on being sort of a religious experience. It’s the freedom to fly and a way to view our nation’s landscapes in a way that’s like nothing else. It’s the satisfaction of being able to acquire the skills that one needs to operate in that environment. There isn’t anything better. I’ve been flying for more than 30 years and I still get giddy when I get in the cockpit. It’s such a unique way to see this country and sharing it with others makes it all the more special.

To volunteer for the Recreational Aviation Foundation or make a donation, visit theraf.org.