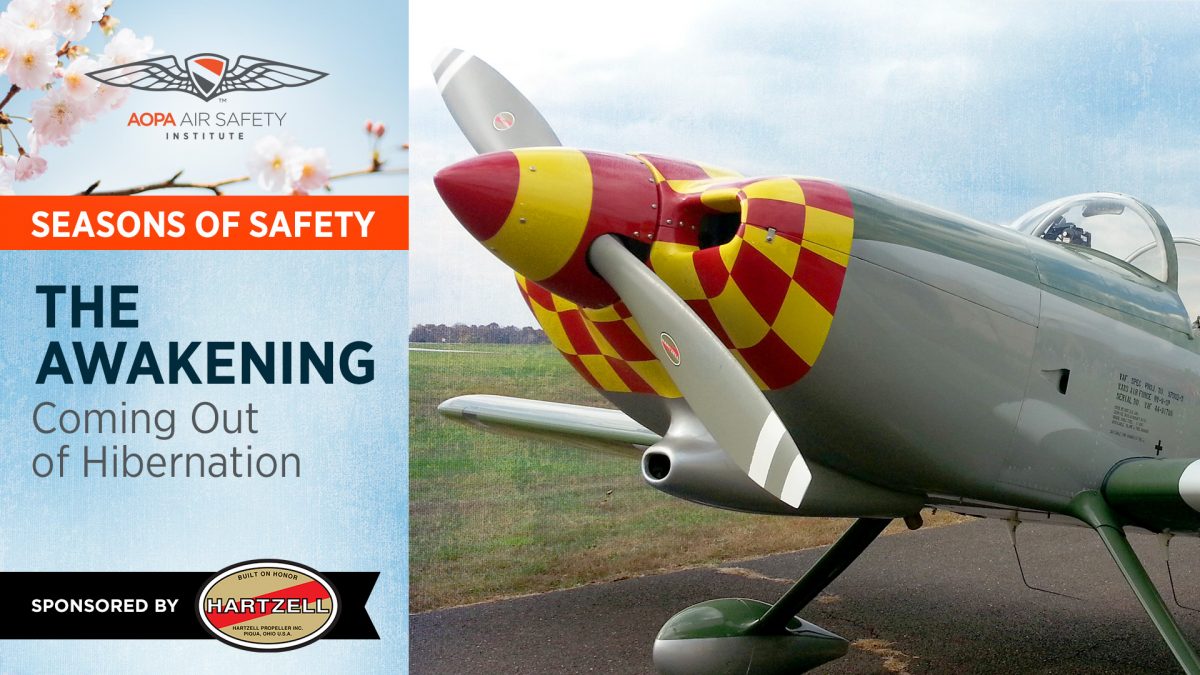 At the start of each season, ASI is live-streaming a video with tips from Executive Director, Richard McSpadden. The debut episode, “The Awakening: Coming Out of Hibernation,” highlights the key steps pilots should take before taking their first flight of the spring flying season.

Here’s a quick recap of some of the top tips covered in the first episode:

Know the difference between currency and proficiency

As general aviation activity ramps up in the spring months, accidents go up, too. Before you hop in the cockpit, think about whether you’re both current and proficient.

Look back in your logbooks, whether paper or electronic. Review the requirements to see if you’re up-to-date. For example, to be able to carry passengers, you need to log at least three takeoffs and three landings within the preceding 90 days. If you fly with instruments, you need to perform and log at least six approaches in the last six calendar months.

Even if you’re legally current for springtime flying, you may not be proficient. As Richard says, “You’re not the same pilot with the same skill level and proficiency as you were back in September or October.”

For example, professional baseball players start their season with spring training; they don’t jump into the World Series right away. Like baseball players, pilots would be wise to start slow and warm up to the skill level where they left off in the fall. Try practicing on a flight simulator or even do some armchair flying!

The ASI recommends updating your personal minimums before the spring flying season. You can download personal minimum contracts for VFR and IFR flying on the AOPA website.

Emergency situations can happen at any time; they don’t take a break for seasonal adjustment. Run through basic emergency procedures, such as engine failure or smoke in the cockpit. As you clean out your airplane, make sure your emergency checklists are handy in case you need them.

Before your first flight of the season, check out the ASI’s Focused Flight Review, which offers packaged flight profiles designed to tackle gaps in proficiency.

Clean and inspect the airplane

Whenever you’re coming back from a flying break, plan to take a significant amount of time to get the airplane ready.

Start by taking a walk around the airplane, looking for signs of corrosion, cracks, bird nests, and condensation. Stand back to get a big picture of the exterior, then do an up-close inspection.

Next, check out the interior. Now is a great time to “spring clean” your airplane, taking out any trash and expired charts. Empty and repack your flight bag. Do the same thing with your survival kit and first aid kit.

Then, make sure the battery is fully charged. Check the oil and inspect the state of the engine. Look for leaks, damage, cracks, and fraying—anything that could lead to a bigger problem during flight.

Be sure to inspect the propeller carefully. Check for damage and nicks as you normally do. Also, look for leaks around the seals and cracks or deterioration in the deicing boots if you have them. Prop damage can be exacerbated by the cold weather, especially if your airplane was tied down on the ramp and exposed to the elements all winter.

Bringing your airplane out of “hangar hibernation” will take a while. Consider taking the first flight by yourself or with another patient pilot, so you don’t feel rushed. Happy flying!

P.S. Subscribe to the Air Safety Institute’s YouTube channel so you can tune into their next video on the specifics of summer flying!