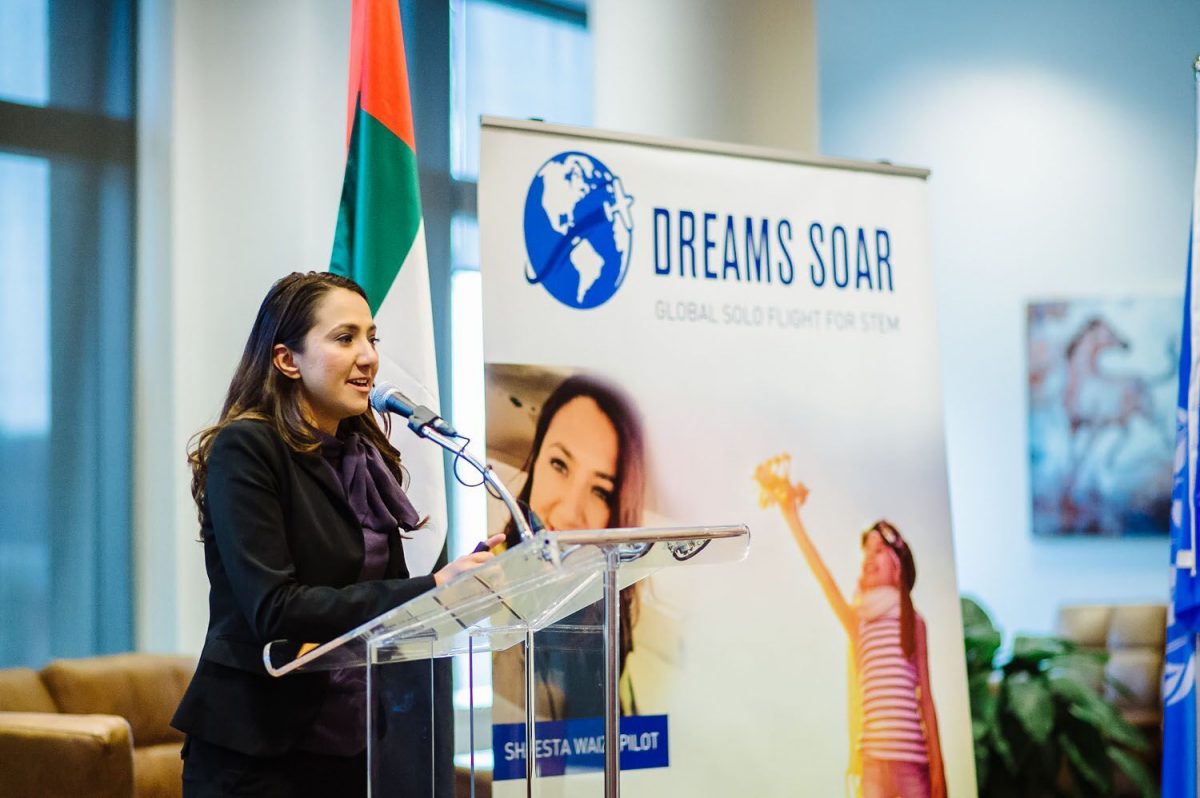 Inspiring the Next Generation: Shaesta Waiz’s Global Flight for STEM

Only 24 percent of US professionals in STEM are female, and women make up just 5 percent of airline pilots worldwide. Shaesta Waiz is on a mission to change that.

In October 2017, 30-year old Waiz fulfilled her dream of flying around the world, becoming the youngest woman to complete a global solo flight in a single-engine aircraft.

Waiz wasn’t motivated to complete her ambitious goal just for the thrill of breaking world records. Rather, she was driven by a greater mission: inspiring the next generation of girls to overcome barriers and pursue STEM (science, technology, engineering and mathematics) and aviation education.

Overcoming adversity is nothing new for Waiz. Born in a refugee camp in Afghanistan, Waiz’s family emigrated to the United States in 1987 to escape the brutal Soviet-Afghan war and eventually settled in Richmond, California.

The second oldest of six girls, Waiz was raised in a small home where no English was spoken. Growing up in Richmond, she was met with both language and cultural barriers. She didn’t become fluent in English – her third language – until she was in middle school, and never considered herself a serious student.

“I struggled in school,” Waiz said. “I lived in an underprivileged school district where substitute teachers, sharing textbooks with classmates, and watching friends drop out of high school was the norm.”

As a young girl, Waiz assumed her future held little more than the traditional role expected of many Afghan women: Get married at a young age and start a large family. She never imagined attending college or pursuing a career. It wasn’t until she discovered an interest in aviation that she reconsidered her life’s purpose.

Ironically, Waiz had a paralyzing fear of flight. She hadn’t been on a plane since leaving Afghanistan as an infant, so when she received a plane ticket to visit relatives in Florida at the age of 18, she was forced to face her fears.

“I was terrified,” Waiz said. “I kept thinking in my mind, ‘This plane is going to launch into the sky like a rocket.’”

However, as the flight progressed, Waiz felt her worries dissipate. She fell in love with the sensation of flying, and by the time the jet touched down, she was hooked. She was going to become a pilot.

After two years at a community college, Waiz applied to Embry-Riddle Aeronautical University, where became the first person in her family to earn a bachelor’s and master’s degree.

Pursuing an education in a non-traditional field wasn’t always easy for Waiz. She reached out to the Afghan government to ask if there were any other female Afghan pilots who could mentor her. There were none. This revelation motivated Waiz to push past her challenges and become the first certified civilian female pilot from Afghanistan, earning her private pilot’s license, instrument rating, and commercial license.

While enrolled at Embry-Riddle, Waiz founded the Women’s Ambassador Program, an initiative that seeks to mentor and support young women pursuing an education in aviation and engineering. The program increased female enrollment at the Daytona Beach campus from 11 percent to 22 percent during Waiz’ tenure, and continues today.

The success of the Women’s Ambassador Program encouraged Waiz to advance her efforts on a global scale. In 2014, she founded the non-profit organization Dreams Soar, Inc. to empower more women to pursue STEM and aviation education and careers.

“I started Dreams Soar to share my story with women around the world, to let them know it is possible to achieve your dreams, regardless of the challenges and traditions you may face,” Waiz said.

Inspired by one of her role models, Jerrie Mock, who in 1964 became the first woman to successfully complete a solo flight around the world, Waiz set her sights on an ambitious journey of her own. She would become the youngest woman to circumnavigate the globe in a single-engine aircraft. Along her route, Waiz planned to partner with other strong female role models to share and promote STEM and aviation.

As Waiz planned her flight, she focused on preparing her 2001 Beechcraft A36 Bonanza to ensure optimal performance and safety for the arduous journey ahead. She headed to Hartzell Propeller’s headquarters in Ohio for a propeller overhaul in advance of her record-breaking flight.

“I remember the day I flew the Bonanza from Daytona Beach, Florida to Piqua, Ohio,” Waiz said. “Upon landing, I was warmly greeted by the Hartzell team for a propeller overhaul. After touring the headquarters and meeting several of the technicians and mechanics, it was reassuring to know that I had the support of Hartzell while flying a Bonanza around the world.”

On May 13, 2017, Waiz officially embarked on the first leg of her global solo flight for Dreams Soar, backed by the support of industry partnerships, a “Dream Team” of volunteers including college students and a group of seasoned advisors who would organize her outreach and flight schedule from the ground.

Waiz’s traveled for 145 days, visiting 22 countries across five continents and holding 32 outreach events that inspired more than 3,000 young girls and boys. But her journey wasn’t always smooth sailing: she faced weather and technical delays that slowed her progress and faced the challenge of crossing some of the world’s largest oceans without radio contact.

Waiz’s path also included a special return visit to her homeland of Afghanistan. There, she met with President Ashraf Ghani and told him of her plans to create more educational opportunities for Afghan women and start a STEM school for young girls.

On October 4, 2017, Waiz landed in Daytona Beach, Florida, concluding the final flight of her voyage. But while the global flight may have ended, the mission of Dreams Soar is far from complete.

Together with the Dreams Soar team, Waiz will continue to inspire the next generation of STEM and aviation professionals, especially young girls, around the world.

“We plan to build a scholarship program to empower children and young adults that were inspired by Shaesta on her Global Flight for STEM, to enable them to take a flight lesson, take an engineering course or seminar, whatever is aligned with their personal goals,” said Dreams Soar Outreach and Logistics Coordinator Jill Meyers.

Waiz will continue holding outreach events around the world, visiting countries she wasn’t able to visit on her flight in 2017, and also returning to some locations that truly inspired her.

For Waiz, her successful global flight was just the beginning of a lifelong pursuit to help young people to overcome obstacles and reach for their dreams, whatever they may be.

“Every time I open the door of an aircraft, I ask myself, ‘How did a girl with my background become so lucky?” Waiz said. “The truth is, anyone can be me.”