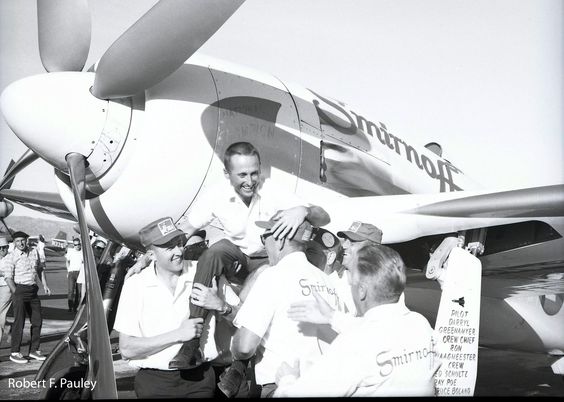 Darryl Greenamyer was born in California on the 13th of August, 1936, a little too late to test aircraft for the Wright Brothers or participate in the Great Wars, but perfectly timed to step into history as a record-breaking racing pilot.

Greenamyer first took to the air in the U.S. Air Force as a member of the U.S. Air Force Reserve. He developed a love for speed and the sky, a passion he was able to continue to feed after leaving the Air Force when he became a test pilot for Lockheed Martin. He flew the CIA’s A-12 and SR-71 spy planes, and once flew from California to Florida in 58 minutes flat. It was at Lockheed Martin that he connected with the engineers who would become his go-to team for modifying the aircraft that he would use to break records as an independent racing pilot in the 1960’s.

He earned his first big win at the Reno Air Races in 1965 in the Unlimited class and would go on to become the third most successful competitor in the race’s history. The Reno Air Races feature 40-foot pylons that must be navigated by four classes of aircraft: T-6’s (generally, WWII era aircraft), biplanes, Formula One aircraft, and the Unlimited class, which has an unrestricted limit on engine horsepower.

His modified F8F Bearcat, the Conquest I, broke the piston-engine speed record in 1969 (which hadn’t been broken in 30 years). Working with other engineers, he also built a modified F-104 Starfighter that would set an FAI Class C-I Group III 3km speed record of 988.26 MPH in 1977. It took thirteen years to acquire and assemble all of the parts for the aircraft, which came from scrap piles, old aircraft wrecks, junk lots acquired from Eglin Air Force Base, the US Navy, and even castoffs from NASA. One person’s junk is another’s treasure – and what a treasure he created.

He would go on to win in the Unlimited division six more times, all but one of them in the Conquest I. The famous aircraft is now on display at the Smithsonian National Air and Space Museum in Washington, DC. Greenamyer himself, now 80, is retired and lives in California.