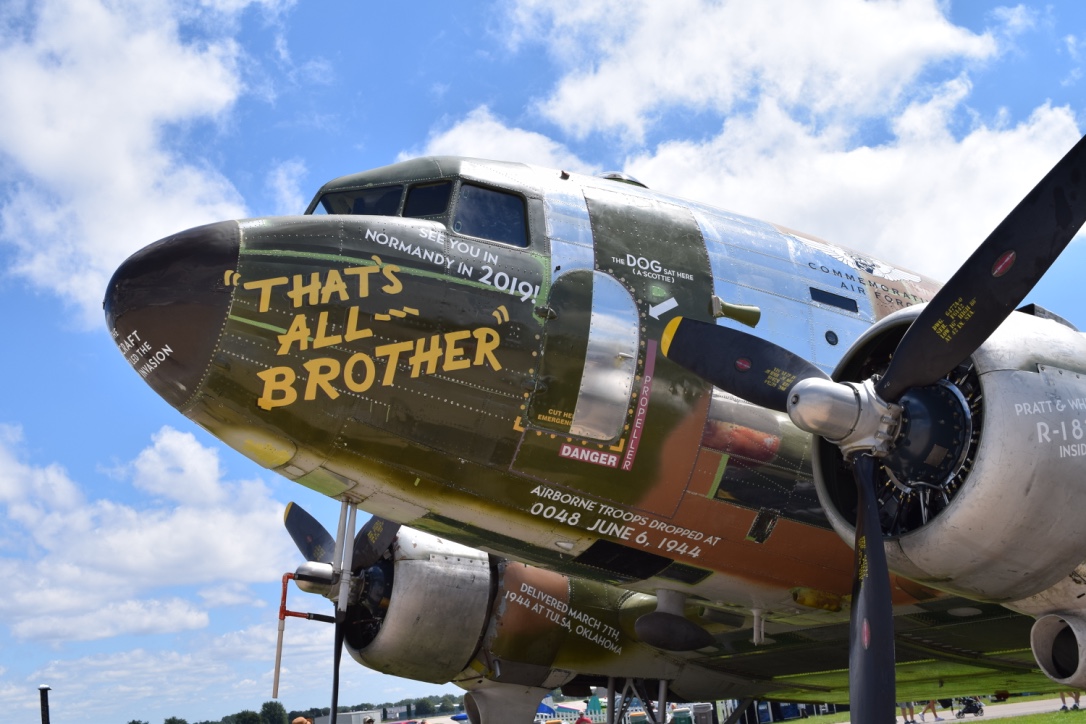 In the early hours of June 6, 1944, a formation of more than 800 C-47 aircraft deployed from England to Normandy, France in the first wave of the D-Day invasion. The aircraft that led the way was named That’s All, Brother, and was flown by Lt. Col. John M. Donalson, who chose the leading aircraft’s name as a personal message to Adolf Hitler that the Allied invasion would bring an end to his dictatorship. Equipped with an early form of airborne radar, That’s All, Brother successfully guided the fleet of aircraft, which dropped thousands of paratroopers behind enemy lines.

After service, That’s All Brother went through 16 civilian owners, and its incredible historical significance was believed to be forgotten. That was until its airframe was rediscovered in an aircraft boneyard at Basler Turbo Conversions in Oshkosh, Wisconsin in 2015. After a U.S. Air Force historian tracked down the aircraft and traced its serial number, That’s All Brother’s legendary past was confirmed.

The Commemorative Air Force (CAF), a non-profit organization focused on restoring vintage military aircraft, acquired That’s All Brother with plans to restore the historic aircraft to its original flying condition and eventually transform it into a flying history museum. The CAF made a goal to complete That’s All, Brother in time for the 75th anniversary of D-Day in 2019 when it will lead the “Daks Over Normandy” flyover. During the commemorative event, dozens of C-47s will once again fly over the English Channel and drop paratroopers to honor the 1944 mission.

Bringing That’s All, Brother back to its original 1944 condition was not an easy feat. In partnership with the CAF, Basler Turbo Conversions started the enormous task of repairing and rebuilding the aircraft, a process which took over 20,000 hours. In an effort to keep as much of the aircraft as possible, the original piston engines and propellers were overhauled and reinstalled.

In 2016, the aircraft was assigned to the Central Texas Wing location of the CAF for further restoration of its non-structural components and interior details. The restoration team painted the aircraft in its historical paint scheme and added facts and figures about the D-Day invasion to the exterior. The team also sought out vintage components to bring the aircraft back to its authentic configuration. Today, the aircraft features a full panel of 1940s-era avionics, which can be removed to reveal a glass instrument panel with the latest technology. The newly restored aircraft took its first flight in over a decade in early 2018.

Since its restoration, That’s All, Brother has flown over 100 hours and appeared at numerous air shows and aviation events across the country. Leading up to the anniversary flight in 2019, the team is tracking down the names of those who were on board the aircraft during the D-Day mission. Eventually, the CAF plans to maintain the aircraft as a flying museum, offering rides in the aircraft and conducting educational programs to keep its history alive. Visit ThatsAllBrother.org to learn more and stay up-to-date with the project.