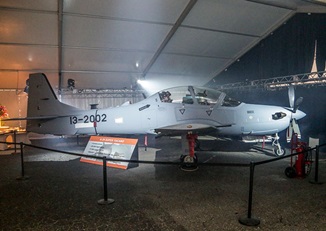 The first Embraer A-29 Super Tucano aircraft assembled in the United States have officially rolled off the assembly line. After years of effort, Embraer is now supplying 20 of these advanced military training and light-attack aircraft to the U.S. Air Force. Embraer has been manufacturing the Super Tucano for years in Brazil to meet demand from customers around the world, but their facility in Jacksonville, Florida is now dedicated to serving the needs of the United States Armed Forces.

Hartzell is proud to provide propellers for the Super Tucano, as well as other light military aircraft serving America and it’s allies around the world. It is a new chapter inHartzell’s long history of support for the American Armed forces. Hartzell also supplied propellers for military aviation during World War I and World War II and has offered engineering support for many experimental aircraft, including the Boeing Condor. Our ongoing mission to create the highest caliber airplane propellers makes Hartzell the ideal partner for any application, and our years of experience mean we have the know-how to get jobs done right.

America’s new A-29 Super Tucano aircraft are another fine example of what can be accomplished through dedication to engineering and performance. We congratulate Embraer on their achievement and appreciate the opportunity to put more of our advanced propellers in the sky.