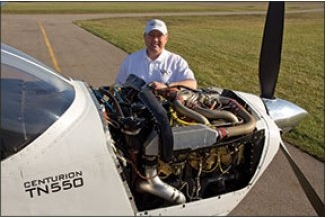 Vitatoe Aviation in Chillicothe, Ohio has received an STC to equip the Cessna P210 and T210 with a turbonormalized IO-550P. Tubonormalization utilizes mechanically compressed air to prevent engine power drop-off as the aircraft gains altitude. It is similar to turbocharging, but limits the the compressed air to pressures at or near sea level. Turbonormalized engines perform as if they were at sea level, where engines deliver the most power. The ability to climb strongly at any altitude enables pilots tooperate more easily in areas where changing altitude is critical (such as mountainous areas), find more comfortable cruise altitudes during flight and climb to avoid inclimate weather.

Vitatoe’s system takes advantage of the P210’s existing turbocharger and converts it to turbonormalize the engine. However, the P210’s existing McCauley propeller was not able to meet vibration requirements with the new system. Larry Vitatoe, President of Vitatoe Aviation, asked Hartzell to design new propellers to accompany the turbonormalizated setup. Hartzell engineered two aluminum scimitar props to help Vitatoe’s team realize their vision of a turbonormalized P210.

The aluminum airplane propellers designed by our engineering team reduced takeoff noise by 2.5 decibels, but that is just a fraction of the performance increases generated by Vitatoe’s new setup. Rick Durden reviewed the turbonormalized P210 for AVweb.com, and here’s a bit of what he had to say:

“Vitatoe Aviation’s turbonormalized P210 conversion may just have turned the Cessna P210 into the airplane it should have been all along. I’ve liked the P210 ever since I first flew it in 1979. It’s fast, carries a good load, has honest handling and the pressurization spoiled me.

However, the first part of any flight always seemed to be a battle between a decent rate of climb and engine cooling. When going fast enough to keep CHTs out of the stratosphere, the rate of climb was usually around 400 or 500 FPM. It took a lot of fuel and time to get to altitude. This mod fixes those problems and turns the airplane into a 200-knot cruiser.”

Click here to read Rick’s full review of the turbonormalized P210. It has been a great pleasure to work on this project with the team at Vitatoe Aviation. Ohio is the “Birthplace of Aviation,” and we always enjoy partnering with other Ohio firms to push the boundaries of airplane technology. Thanks to Vitatoe Aviation for the opportunity to join them in this successful endeavor.