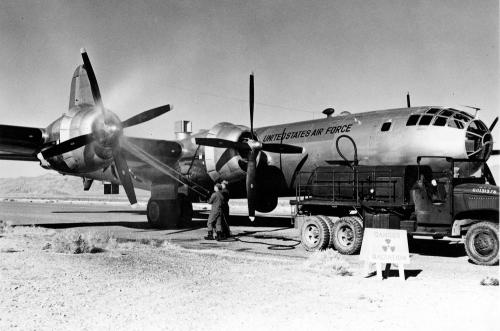 Before the United States entered World War II, Boeing had submitted a proposal for the most technologically progressive aircraft of its time: the Boeing B-29 Superfortress.

This four-engine, propeller-driven heavy bomber was also the most expensive weapons project the United States greenlit during World War II. An expansion on its predecessor, the B-17 Flying Fortress, the B-29 was designed for strategic bombing missions, including low-altitude nighttime attacks.

Produced in 1943, the B-29 was unlike anything the U.S. Air Force had yet put into the air. The Superfortress was the world’s heaviest production plane, which made flight after takeoff difficult. Unlike most planes, the B-29 required a vital struggle for airspeed rather than altitude immediately after takeoff.

The aircraft boasted impressive new features, however, including computer-controlled machine guns, a tail gun, two crew areas, a pressurized cabin, and dual-wheeled, tricycle landing gear. In wartime, the B-29 was capable of flight at altitudes of up to 31,850 feet and speeds of up to 350 mph.

These new technologies made the B-29 virtually unstoppable. Few enemy aircraft could reach the altitude and speed required to damage the plane, and hitting the B-29 from the ground in combat was difficult for all but the heaviest of anti-aircraft weapons. The most famous B-29s of the World War II-era was the Silverplate series, which carried the world’s first atomic bombs.

After the war, B-29s were modified for new purposes, such as weather reconnaissance, rescue duty, inflight refueling, and even flying television transmitters. The B-29 was used again in Korea between 1950 and 1953, this time clashing against jet fighters and electronic weapons. The last B-29 was retired from military service in 1960, but 22 remain on display in museums around the country and the world.