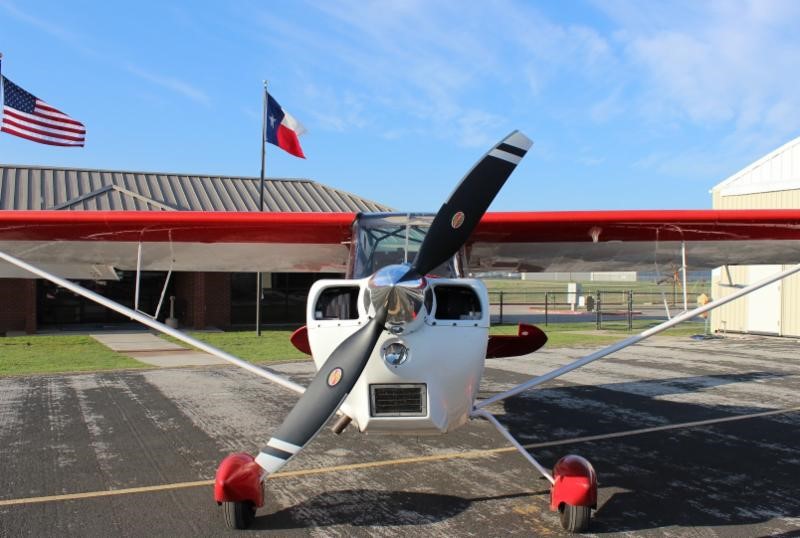 When Iowa-based pilot Dick Swanson wanted to boost propeller performance for his American Champion Super Decathlon, he looked no further than Hartzell Propeller. Swanson, who has been flying since 1975, purchased his Super Decathlon six years ago and is constantly looking for new ways to enhance the aircraft’s aerobatic capabilities.

Together with his daughter, Sara Arnold, Swanson regularly participates in the International Aerobatic Club, the world’s largest aerobatic club. Swanson and Arnold are currently the only father-daughter pair actively competing in the IAC at the same time, and the two have each won several trophies in regional contests.

“Sharing a love of flying with family has always been important to me. Together, we’re trying to make our Super Decathlon the best aerobatic aircraft we can.”

Upon hearing about the benefits of Hartzell’s carbon fiber composite propellers from other pilots, Swanson knew he was ready to upgrade his current prop.

“In conversation with other pilots, I found that Hartzell propellers require a lot less maintenance, and have a longer life,” said Swanson. “The props come highly recommended, so I knew I wanted to go with Hartzell.”

This July, Hartzell announced the Trailblazer received a Supplemental Type Certificate (STC) for the American Champion Super Decathlon, a two-seat taildragger capable of sustaining aerobatic stresses between +6g and -5g. The Trailblazer, a 76-inch diameter, two-blade constant speed prop, is available under Hartzell’s innovative Top Prop program for retrofitting on the Super Decathlon fleet. The prop was engineered to be lightweight, made from composite materials designed to offer the ultimate in aerobatic performance when integrated with the Super Decathlon.

Swanson is among the first general aviation pilots to install the newly-certified prop and says he started noticing impressive performance improvements immediately. “I went out and flew the airplane three times, taking mental notes of the initial differences I could feel. Then, I let my daughter fly it. When she landed, she was all smiles. She noticed the exact same improvements that I did when flying the aircraft!”

Swanson says the Trailblazer has enhanced performance in all stages of flight. “On take-off, at slower speeds, the propeller produces noticeably more thrust. It gets off the runway quicker and climbs at a faster rate,” he said.

Swanson observed exciting improvements in the ability to control aerobatic maneuvers after the Trailblazer was installed on his Super Decathlon. “There’s much less ‘fighting’ to do with aerobatic maneuvers,” he said. “It makes rolls, spins, and loops smoother, and the whole airplane seems more controllable and predictable. When power is pulled back, the propeller acts as a brake, allowing for more precise maneuvers. Overall, flying the airplane seems a lot easier with this propeller.”

Swanson also noted a significant reduction in vibration with the new prop. “Vibration is a big deal,” he said. “With the Trailblazer, the airplane is so much smoother. The compass on the dash doesn’t jump up and down as much. Noise is also reduced in the cockpit, which saves my instrument panel from being damaged and makes flying more comfortable.”

Swanson says his new propeller’s ramp appeal is another bonus. “Everyone comes by and says, ‘Wow, what’s that?’ It’s definitely a head-turner and looks very nice on the runway,” he said. “But best of all is the performance boost. We can’t wait to show it off at our next contest.”