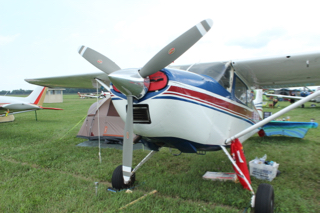 The Cessna 185, also known as the Skywagon, is a favorite among bush pilots for its rugged durability and exceptional hauling capabilities. The six-seat, single-engined aircraft was first introduced in 1961 as a bigger version of the popular Cessna 180.

The heavy taildragger is often compared to an aerial pick-up truck. With a useful load of over 1,600 pounds, the Skywagon can haul just about anything in and out of short, unimproved airstrips, making it an ideal choice for charter operators in the backcountry of Canada, Alaska, Africa, Asia, and South and Central America.

Like most Cessna planes, the Skywagon has a reputation for being dependable, easy to maintain, and fun-to-fly. When equipped with floats, skis, or oversized wheels, the Skywagon can operate with ease from nearly any surface.

With a simple, no-frills design, the Skywagon is easy to enter and exit and offers ample interior space. Although it was certified as a six-seater aircraft, most owners remove the third-row bench seat to make room for extra cargo.

By the end of its production run in 1985, over 4,400 Skywagons were built, with about 200 used in military service as U-17As and U-17Bs. Today, the Cessna 185 is still a trusted choice for bush flying operations, but plenty of pilots love to fly them just for the fun of it. Many owners make aftermarket modifications to boost the Skywagon’s already-impressive performance and hauling capabilities. Common additions to choose from include straight or amphibious floats, skis, tundra tires, cargo and fuel pods, modern avionics, and an upgraded engine and propeller combination.

Nearly 60 years after it was first produced, the Cessna 185 remains a perfect machine for pilots looking for maximum load hauling, taildragger ruggedness, and stellar backcountry performance.